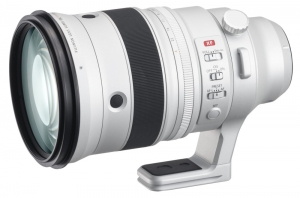 The XF200mmF2 R LM OIS WR lens will be available as a kit, paired with the high performance FUJINON XF1.4X F2 TC WR teleconverter, which extends the focal length of the lens by 1.4 times. The teleconverter allows the lens to cover a focal length equivalent to 427mm at F2.8.

The FUJINON XF200mmF2 R LM OIS WR is a fast telephoto lens which is able to utilize the full capability of FUJIFILM’s X-TransTM CMOS sensor to achieve edge-to-edge sharpness even when the aperture is wide open. It faithfully captures the atmosphere of each scene, thanks to its outstanding performance and ability to produce beautiful bokeh. Furthermore, the lens features a new Focus Preset function, allowing photographers to quickly change the focus to a preset position to capture subjects with ease. The lens barrel is made of magnesium alloy which makes it both lightweight yet very durable. The lens is also resistant to dust, moisture and low temperatures down to -10 degrees Celsius, making it ideal for use by professional photographers in challenging conditions.

The XF1.4X TC F2 WR is a high-performance teleconverter that is fitted between a camera and a lens to extend the lens’ focal length by 1.4 times. When combined with the XF200mmF2 R LM OIS WR, the teleconverter provides the focal length equivalent to 427mm in the 35mm film format. It is designed to minimize any aberrations to ensure high image quality even when the maximum aperture of F2 is used.

(1) Offering outstanding performance and beautiful bokeh
The lens is made of 19 elements in 14 groups, including one large-diameter super ED lens element and two large-diameter ED lens elements to minimize chromatic aberration. High-precision polishing technology, developed for broadcast lenses, has been used to prepare the large-diameter lens elements to achieve outstanding image-resolving performance and creamy bokeh. This element is produced with an accuracy of less than 0.1μm. High-speed AF is made possible thanks to the lightweight focus lens group and the use of linear motors.

(3) Easy AF operation
Focus Preset Function*1 instantaneously changes the focus to a preset position to capture your main subject with ease without having to make focal readjustments.
Focus Range Selector switch limits the shooting distance range for autofocusing. Activating this function narrows down the range of shooting distance and delivers high-speed AF when shooting a subject at the distance of 5 meters or greater.
The Focus Control button*1 is positioned at the tip of the lens barrel. Use the Focus Select switch to assign a function of your choice, such as Focus Preset, AF-ON and Focus Lock.
*1 The camera body’s firmware must be updated to activate the Focus Preset function and Focus Control button. Updated firmware is due to be released at the same time as the lens.

There is also a new mechanism that fixes the focus motor group when the camera is not in use, which reduces any vibrations that may occur from the linear motors’ magnets being disengaged.

(5) Advanced durability able to withstand various shooting conditions
The lens is lightweight yet robust, thanks to its magnesium alloy construction. The barrel is sealed at 17 places to make the lens resistant to dust, moisture, and low temperatures down to -10 degrees Celsius. The front lens element is coated with fluorine to repel water and dirt, adding extra durability so that the lens can be used outdoors with peace of mind. The matte silver color reduces the risk of the lens overheating under intense summer temperatures. The paintwork is designed to diffuse light which prevents the lens from generating strong light reflections.

(8) Accessories
Also simultaneously released will be the PRF-105 protective filter and the FLCP-105 front lens cap.