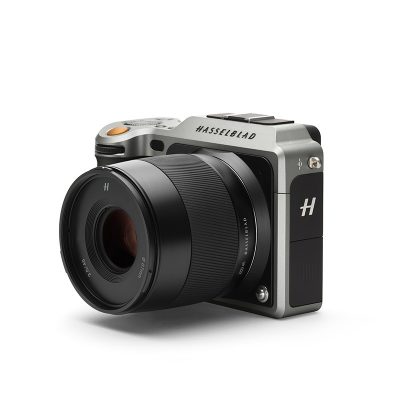 Hasselblad has today announced a mirrorless medium format camera that the Swedish company bills as a groundbreaking development. The X1D includes a 50MP sensor and a top ISO of 25,600.

The Hasselblad X1D will initially come with the option of two lenses: a new 45mm and 90mm.

Speaking at a press launch in Gothenburg, Sweden, Hasselblad CEO Perry Oosting (pictured below) said: ‘We hope to write another chapter in the Hasselblad story.’

Hasselblad says the X1D is aimed at the professional – as a more portable camera – and the ‘dedicated amateur’ and semi-professional who wants to upgrade to a medium format system from a full-frame DSLR.

The firm hails the X1D as a small camera with a ‘huge’ sensor, yet solid and light, at 725g weighing the same as half an Apple MacBook Air laptop.

Borrowing the imaging sensor from the H6D range, features include a touch display, ’14 stops’ of dynamic range and Full HD video at 25 frames per second.

A 30mm lens will be unveiled at the Photokina trade show in Cologne, Germany in September.

Priced £7,188, the X1D is due out at the end of August/beginning of September.

Oosting said he sees the X1D launch as a ‘milestone’ for Hasselblad, but indicated at more to come during 2016, telling journalists: ‘There will be more surprises at Photokina.’