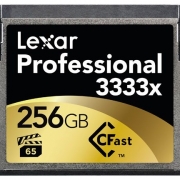 The CFast 2.0 specification is the next generation of high performance memory cards designed for professional applications in still imaging and video capture.

Designed to maximise the capabilities of the next-generation of high-definition camcorders and high-resolution digital SLR cameras, the new cards provide a read transfer speed up to 3333x (500MB per second), which is three times faster than any CompactFlash card. Additionally, the new Lexar Professional 3333x CFast 2.0 cards will support the Video Performance Guarantee (VPG-65) specification for professional-quality video capture, and includes the latest version of Image Rescue software.