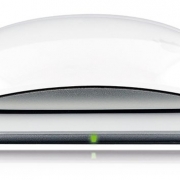 The folks over at Mobee have sent us one of their cooler products for us to review – the Magic Charger, a replacement battery and inductive charging station for Apple’s Magic Mouse™

Mobee describe it as the world’s first wireless, eco-friendly, inductive charger for Apple’s Magic Mouse™ and our first impressions were good when we opened the packaging.  Often times you can tell a companies quality philosophy from their packaging and the Mobee Magic Charger came in an attractive sturdy box that reminded us of Apple’s own packaging, so far so good.

Once you’ve opened the box installation is about as simple as it gets; remove your existing batteries from your mouse, slip in the battery pack and plug the wireless charging base into a spare USB port.  You don’t even need to worry about that fiddly little flap on the bottom of your mouse as their battery pack contains one built in.

The charging base shouts Apple at you from every angle, this product blends in seamlessly on your desk along with the other Apple peripherals and could have been made by Apple themselves, this will appeal to the purist Apple fans without a doubt.

A small detail is that due to the Mobee battery pack being rated at a smaller voltage than Apple’s own you will never see more than 80% charge shown on your status bar for your mouse.  Mobee claim around 6 days use for a charge but as the charging station is sat on the desk anyway we all agreed in the office that it was just as easy to place it on the charging station when not in use anyway so this might be academic.

One of the more annoying quirks of Apple’s mouse is that depending on the brand of battery you use the mouse could often disconnect intermittently but as the Mobee battery fits so snugly we’ve not had a single dropout in over a week of use.

All in all there is not a lot more than can be said about this product which is really a testimony to the fact that it works exactly as described.  After a week of using the mouse with it installed you forget about it entirely, in theory you will recoup the cost of the product by not having to purchase batteries making it almost a no-brainer purchase.

Our recommendation? If you own an Apple Magic Mouse™ then treat yourself to one of these, the product is well built, simple to install and even looks good on your desk.