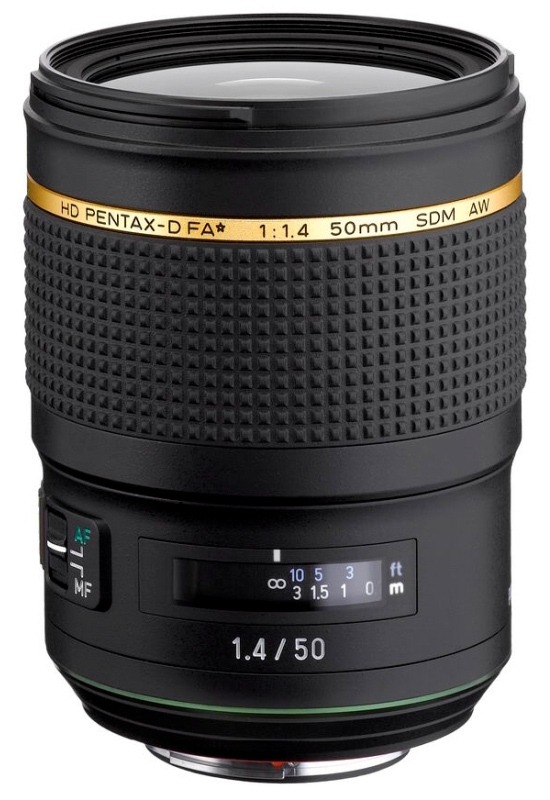 Pentax have announced a new standard wide-aperture prime lens for their K-mount cameras, including the K-1 Mark II.

The HD Pentax-D FA* 50mm f/1.4 SDM AW is the latest addition for the star (*) range of lenses boasting the best image performance of all Pentax lenses. It will be available from 20 July with an RRP of £1199.99.

PENTAX conducted an extensive review of its in-house standards for the premier Star series for the new lens, demanding the maximum reduction of various aberrations in order to deliver the highest image quality. PENTAX also designed the lens to provide excellent imaging performance with all compatible camera bodies – including next-generation digital SLR cameras which will feature improved image quality and performance.

The new lens delivers the superb imaging power demanded of a new-generation, high-performance Star-series lens, delivering exceptional resolving power from the centre to the edges of the image field, even when set to open aperture. Thanks to PENTAX-original lens coating technologies, including the latest Aero Bright Coating II for exceptionally low reflection, and the high-grade HD Coating, it produces extra-sharp, high-contrast images free of flare and ghost images. Its dustproof, weather-resistant body also makes it extremely dependable and durable for shooting in demanding outdoor conditions.

Key Features:
1. New-generation, high-performance Star-series lens with large F1.4 maximum aperture
This lens has been developed as a new-generation member of the high-performance Star series; a line-up designed to deliver extra-clear, high-contrast images with edge-to-edge sharpness by reducing various aberrations to a minimum. After conducting an extensive review of the Star-series standards, PENTAX has designed this lens to deliver greatly improved resolving power, looking ahead to its use with more advanced, next-generation camera bodies. It provides exceptionally high imaging performance even at open aperture, in addition to a beautiful bokeh (defocus) effect and an outstanding image rendition at close range. Developed as the first model of the new-generation Star-series lenses, this large-aperture standard lens boasts an extra-large F1.4 maximum aperture, useful with many different subjects in a range of applications, including portraiture with an effectively defocused background, and hand-held shooting of indoor scenes.

2. State-of-the-art optical technology
The lens is treated with PENTAX-developed Aero Bright Coating II* — a lens-coating nanotechnology employing a super-low refractive film fabrication process. By coupling this advanced lens coating with the high-grade, multi-layer HD Coating** — which reduces average reflection in the visible ray spectrum to less than 50% of conventional multi-layer coatings — this lens effectively reduces flare and ghost images to a minimum even in demanding lighting conditions such as backlighting. By incorporating three super-low dispersion glass elements and one aspherical element in its optics, it effectively compensates chromatic and spherical aberrations, and produces brilliant, high-contrast images with edge-to-edge sharpness. Since it minimises distortion even at a focusing distance of approximately one metre, it produces crisp, distortion-free images over the entire focusing range, from the minimum focusing distance to infinity.

3. Dustproof, weather-resistant construction
Developed as an AW (All Weather) model, this lens features a dependable dustproof, weather-resistant structure with eight special seals to prevent the intrusion of water and dust into the lens interior. When paired with a PENTAX weather-resistant digital SLR camera body, it forms a durable, reliable digital imaging system that performs superbly in demanding shooting situations — including rain or mist, or in locations prone to water splashes or spray.