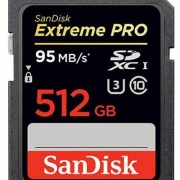 The 512GB model is currently the largest SDXC card in the world, and is ideal for shooting 4K ultra high definition video, FullHD video and high speed burst mode photography.

Since SanDisk unveiled its first 512MB SD card in 2003, capacity demands have increased exponentially and the new 512GB SanDisk Extreme PRO SDXC UHS-I card represents a 1,000-fold capacity increase in just over a decade, yet maintains the same size footprint.

The SanDisk Extreme PRO UHS-I SDHC/SDXC memory cards are available worldwide in capacities of 512GB, 256GB and 128GB. The 512GB Extreme PRO SDXC UHS-I card will be available for $799.99 (MSRP). For more information take a look at the SanDisk website.