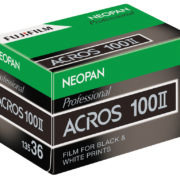 The company terminated sales of its NEOPAN 100 ACROS black and white film, first announced in 2002, after a decrease in demand and it was also proving difficult to obtain the raw materials need for production.

However, after an outcry from fans who didn’t want to see sales of the film end, Fujifilm has announced that they have created a new version of the black & white film after researching ways they can substitute the old raw materials that were hard to obtain and improving the manufacturing process.

Fujifilm also says that it is suitable for shooting in a wide range of fields, such as product photography, architecture photography, long-exposures and night photography.

The NEO PAN 100 ACROS II black & white film will be available in 120mm and 35mm formats but there’s no news on when they’ll actually arrive in stores.