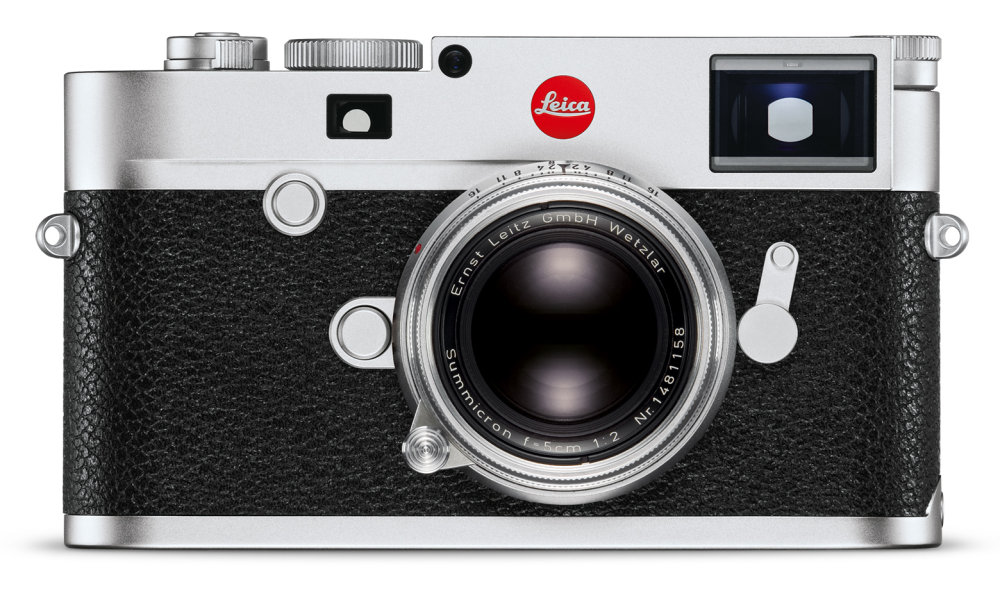 Leica M10 (v2.4.5.0)
• Optimisation of the delete menu: The graphic user interface for the deletion of pictures has been revised.
• Longer exposure times: Exposure times of up to four minutes are now possible at base ISO.
• New continuous shooting mode with lower frame rate: An additional continuous shooting mode is now available (Continuous Low Speed, three frames per second).
• ‘Load profile’ is now available in the favourites menu.
• Aperture value in EXIF data: The camera compares the brightness measured through the lens with the measured ambient brightness to estimate the aperture used. This value is then written to the EXIF data. In some cases, the interpretation of the subject or scene may lead to incorrect estimation of the aperture value, for instance when shooting subjects or scenes with high contrast and black or white objects.
• LED deactivation: The red LED on the back of the camera can now be deactivated in the control elements menu.
• Auto-ISO setting: Auto-ISO for base ISO is set to the default value of ISO 200 to optimise dynamic range.

Leica Q (v3.0)
• Favourites Menu: Users can now enter and save up to 15 settings for faster access in a Favourites Menu.
• Power Saving Mode: If required, the camera can now be set to switch to Stand-By Mode after 10 seconds.
• Extended functions for the Fn button: Even more options can now be selected for programming the multi-function button.
• User Profiles: Profiles can now be imported from and exported to a memory card.
• OIS – optional ‘Auto’ setting: This setting enables automatic activation of optical image stabilisation at shutter speeds of 1/60 s and slower.
• EVF/LCD setting options: This menu item can now be assigned to the Fn button.
• Settings for the electronic shutter: The electronic shutter can now be set to permanently active.
• DNG files: The processing speed of DNG files in the camera has been increased.
• Autofocus fields: The last AF field used is now memorised and recalled when switching the camera off and on again.
• Self-timer: The setting is now memorised and recalled when switching the camera off and on again.
• Exposure preview deactivation option: Exposure preview can now be deactivated in manual mode (especially useful when shooting in the studio with flash systems, underexposed settings or in dark environments).
• Image review: Automatic image review remains active as long as the shutter release button is pressed.

Leica CL (v2.0)
• Programming of setting dial functions: The programming of the two setting dials can now be swapped from one to the other.
• Button lock: Pressing and holding the left-hand setting dial activates button lock (this does not lock the on/off switch, the shutter release or the left-hand setting dial).
• Power Saving Mode: If required, the camera can now be set to switch to Stand-By Mode after 10 seconds.
• Touchscreen autofocus: The AF metering points can now also be shifted with the joystick control in Touch AF mode when using the electronic viewfinder.

Leica TL2 (v1.4)
• Selection of LCD / viewfinder settings: It is now possible to select when and where the content is displayed (up until now, display was simultaneous).
• Customisable left function menu: The items of the left function menu can now be customised by the assignment of up to six of a total of thirteen functions.
• Extended functions for the Fn button: Now, one of a total of six different functions can be assigned to the Fn button.
• Settings for the electronic shutter: The electronic shutter can be deactivated, permanently activated or set to complement the mechanical shutter.
• Focus Peaking in AF Mode: Manual focus corrections can now be applied in AF Mode with the MF-ring. In the meantime, Focus Peaking is available from FW 1.4.
• Focus Peaking with M-/R-Lenses: Focus Peaking is now also available when using M- R-Lenses with the M-Adapter L.
• Exposure correction during video recording: The left-hand setting dial can now be used to apply exposure correction during video recording.
• Zoom-in when reviewing images in the EVF: The right-hand setting dial allows users to zoom in while viewing images in the EVF.

Leica T/TL (v1.8/v2.3)
• Simpler connection between the camera and a smartphone by app
• Reduction of chromatic aberration for all TL-Lenses
• Support and auto-update for the Elmarit-TL 18 mm f/2.8 ASPH.

The firmware updates are available from the Leica website. Users can either download and install the update themselves or have it installed within the scope of the free update service offered in all Leica Stores.

Winner of the June 2018 Image Competition Announced
Scroll to top