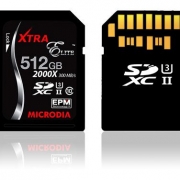 Microdia has announced a new addition to its flash memory card range with read and write speeds of up to 300 MB/s.

The Xtra Elite SD 4.0 Flash memory card is said by Microdia to be many times faster than current flash memory cards. Professional photographers and videographers can simultaneously capture and load images and footage at phenomenal speeds. The card handles 4K- and 5K-resolution videos and images with equal aplomb.

The standard SD card size allows professional photographers and videographers to use the SD4.0 card in the majority of branded DSLR cameras and video cameras currently available. A built-in read/write protection switch provides peace of mind, helping to ensure that data is not lost.