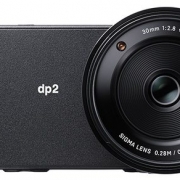 Unique among image sensors, the Foveon direct image sensor is similar to traditional colour film in that its multiple layer captures all of the information that visible light transmits. Along with Sigma’s proprietary image processing technology, this sensor produces incredible resolution, precise gradation, gorgeous colour with breathtaking realism and a 3D feel. In other words, full-bodied image quality.

For the new dp series, we rethought and redesigned every aspect of the camera, including the sensor, engine, lens and body. While retaining its famous textural expression, the updated Foveon direct image sensor produces images that are more colorful, rich, deep, and faithful than ever before.

To a radical degree, the new-generation dp series embodies Sigma’s philosophy of creating cameras that produce works of art. Featuring the highest level of fundamental performance, this series unites artistic expression and daily experience as no other cameras can.

With every element optimized for image quality, this camera is ready to produce works of art
Thanks to its optimised design featuring a fixed focal length lens and integrated body, the dp series offers both sensor and lens performance at the highest level. The result is full-bodied image quality.
The camera body offers a balanced shape, layout and weight distribution. Its complete and robust specification allows the photographer to concentrate fully on photography itself and leverage the camera’s potential to produce outstanding images.

In everyday life, the dp series lets photographers find unexpected opportunities for experiencing emotion and enjoy photography and personal expression in exciting new ways. It is an outwardly simple yet extremely powerful embodiment of Sigma’s philosophy of photography.

All of the fundamental photographic approaches in one lineup of three cameras
The dp series comprises three fixed focal length cameras, each of which features a different basic focal length for a different fundamental photographic approach: the wide-angle dp1 Quattro at 19mm, the standard dp2 Quattro at 30mm, and the medium telephoto dp3 Quattro at 50mm (respectively equivalent to 28mm, 45mm, and 75mm on a 35mm camera). Moreover, the three models share an exciting new camera body that brings out the best performance from the lens and image sensor.

It’s a simple but powerful lineup that delivers medium format-level image quality anywhere, anytime. Take all three with you and select as needed for the perfect shot. Only the dp series puts so much luxurious photographic potential in your hands. Starting with our very first digital camera, we have featured the Foveon direct image sensor, which offers radically better image quality than any other sensor available. Leveraging the light absorption characteristics of silicon, the sensor comprises three layers of photodiodes, each at a different depth within the silicon and each corresponding to a different RGB colour. Since it is the only sensor to use this superior vertical colour separation technology, it is also the world’s only direct image sensor.

Almost all other image sensors are mosaic sensors, which use an array of RGB colour filters in a single horizontal plane to capture colour information. Each pixel is assigned only one of the three colours so cannot capture all three colours at once. In contrast, the Foveon direct image sensor captures colour vertically, recording hue, value, and chroma accurately and completely for each pixel.

In the Foveon direct image sensor, there are no colour filters, which cause a loss of information transmitted by light. Moreover, there is no low-pass filter needed to correct the interference caused by a colour filter array. Finally, unlike the data from other sensors, which requires artificial interpolation to “fill in” missing colours, the data from the Foveon direct image sensor is complete for every single pixel and requires no interpolation. The unique technological principle of this sensor produces consistently outstanding image quality. Capturing the information transmitted by light vertically instead of horizontally, the full-colour image capture system of the Foveon direct image sensor is the only one of its kind in the world. This system makes possible the sensor’s full-bodied image quality, which is characterized by rich tone and gradation and texture that one can almost touch.

The newly developed Foveon X3 Quattro is the latest generation of this unique sensor. While retaining the distinctive characteristics of its predecessors, it offers an even higher level of image quality. In addition to 30% higher resolution, the volume of image data has become lighter, and it enables much faster image processing and lower current consumption.

Maintaining the same exacting standard of image quality while increasing megapixels and enhancing noise characteristics, this 1:1:4 solution was the inspiration for the name of the current generation of Foveon sensor: “Quattro.”

The new dp series cameras feature the newly developed TRUE (Three-layer Responsive Ultimate Engine) III. This image processing engine has evolved in pace with our Foveon direct image sensor and incorporates all of the image processing expertise we have developed over the years. Thanks to new refinements, it is the ideal engine for processing the rich and complex image data produced by the new-generation Foveon X3 Quattro direct image sensor. Our proprietary algorithm makes possible ultrafast processing of an immense volume of image data without any deterioration of the final images. The result is high-definition, 3D-like photographs with outstandingly rich colour detail.